An independent charity supporting the Alexander Turnbull Library for over 85 years.
Our aim is to ensure New Zealand’s stories and documentary heritage are available to all, so they can harvest the full potential of these rich collections.

FoTL was established to promote interest in the Alexander Turnbull Library, and to support its activities; it maintains a strong national membership in furtherance of these aims.

FoTL holds a regular programme of public talks – ten at the National Library of New Zealand, and three in Auckland in 2019/20 – as well as the annual Founder Lecture (presented by Associate Professor Damon Salesa, Pro Vice-Chancellor Pacific at the University of Auckland). This year FoTL public events were attended by approximately 900 people in total.

FoTL supports research in the Library collections through its annual Research Grant.

FoTL supports research in the Library collections through its Research Grant. Literary scholar and writer Sarah Shieff received the 2020 award (worth $20,000) for her project to publish a collection of the letters of poet Allen Curnow ONZ CBE (1911-2001).

FoTL’s publications include the Turnbull Library Record and the annual free magazine, Off The Record, as well as two newsletters distributed to members, with details about the public programme and other activities.

Assisted by Services to Schools, FoTL has committed to offering a creative writing competition for secondary school students, called Smart Alex, for three years. Set up to encourage engagement by students and schools in the ATL collections, it is well supported (about 80 schools in its first year). Prizes to the value of $3,000 are awarded to winning entries in two age-groups and to their school libraries. 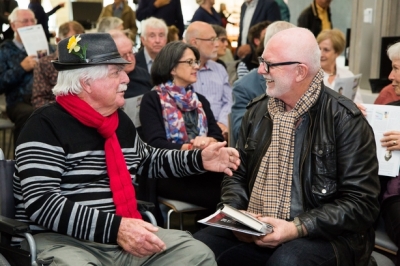 The Archive holds more than 50,000 cartoons by 60 cartoonists and continues to grow, with new digital images added every week and analogue collecting ongoing. Digital collecting is one of the Archive’s strengths: most New Zealand editorial cartoonists donate their work at the same time as they send it to their editors. The Archive also holds significant analogue collections by many of New Zealand’s leading cartoonists, including Gordon Minhinnick, Nevile Lodge, Eric Heath and Chris Slane.

The Guardians Kaitiaki also give advice on all matters relating to the collections and services of the Alexander Turnbull Library to the Minister Responsible for the National Library.

Members are appointed to the Guardians Kaitiaki for a range of skills relating to mātauranga Māori (Māori knowledge), libraries, access and preservation issues, and historical research.

With thanks to our Sponsors